Encouraging the study and protection of the natural environment

COVID19: Even though restrictions have eased, we will still be taking some precautions to protect members who attend: 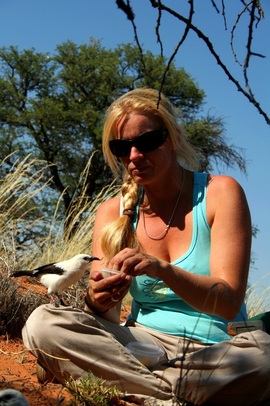 I have been collecting data on the causes and consequences of cooperative behaviour in pied babblers since 2003. My current primary interests are: the causes of variation in contributions to cooperative care, the short- and long-term consequences of helping behaviour (to both the helper and the individual being helped), and how to measure the cost of help. Additionally, I am interested in sexual selection and how that operates in a cooperative species where sexual monogamy prevails and breeding spaces are extremely limited. Specifically, I aim to determine the importance of mate versus rival assessment, and how mate quality affects dispersal and eviction patterns in cooperative species.

An additional aspect of my research involves understanding interspecific interactions and communication. Originally I started investigating these interactions between pied babblers and fork-tailed drongos. More recently, I have begun investigating interspecific interactions in scimitar-bills, yellow-billed hornbills and wattled starlings. The recent arrival of brood parasitism in our study population has caused me to be intensely interested in the relationship between a brood parasite and its cooperative host, and this research is planned for the next few years.

With the help of a new research grant, I am beginning research on understanding long-term population dynamics in cooperative species, including factors that promote the expansion or extinction of groups. I will be using the long-term datasets of Arabian and pied babblers to determine the influence of climatic changes (heatwaves and droughts) on social dynamics at both the group and population level

The magpies of WA were originally observed by Professors Eleanor Russell and Ian Rowley. In 1995 they established a ringed, habituated population in a small town near Perth (which is now an outlying suburb of the ever-expanding city). Eleanor and Ian observed and monitored between 8-10 groups annually but considered the magpies as their hobby rather than an intensive research project because they were both reaching retirement age. However, they did an impressive job of monitoring and recording movements and recruits to the population over a ten-year period. For several years there was no active research on the magpies. However, after meeting with Eleanor and being introduced to the magpies, I (Mandy) re-instigated research and expanded the ringed population. Starting with Eleanor’s six groups, I (Along with my students and collaborators), have expanded the population to 17 groups of magpies (group size ranging between 3 and 14 birds) in two locations in the Perth urban matrix. Research was initiated on the population in 2013, and observation and habituation occurs in a similar way to that described for the Pied Babbler and Arabian Babbler Research Projects. Group size and the number of groups varies annually.

What is a Western Magpie?

The Western Magpie (Cracticus tibicen dorsalis) is a subspecies of the Australian magpie inhabiting southwestern Australia. Magpies vary in their level of sociality over the Australian continent, with cooperative breeding relatively rare on the east coast, but far more common in the west. The Western Magpie is a large (260-350 g) passerine bird that lives primarily in large groups, containing between 3-16 adults. It most commonly inhabits open grassland areas, but has adapted well to human modified landscapes and is commonly seen in urban parklands and reserves. The Western Magpie is cooperative, but not in the traditional sense of cooperation epitomised by the Pied and Arabian babblers. Instead of a single dominant pair, all females in the group may attempt to breed. Often, those that fail to breed become helpers at the nests of other group members, but this is not always the case. In some cases, birds will be present in the group as neither helpers nor breeders. Group members also cooperate in predator defence and food excavation. One of our goals is to determine exactly how cooperative this species is, and what factors promote the occurrence of varying levels of cooperation. Previous research on the population by Jane Hughes and colleagues has revealed extremely high levels of extra-group paternity (>80%), suggesting that group-living in the magpie is somewhat different from the traditional high skew cooperative breeding systems typified by Arabian and pied babblers. Magpies have extremely complex and varied vocalizations, and are considered ‘one of Australia’s most highly regarded songbirds’. As of 2020, there are still magpies alive that were ringed as adults in the late 90’s, indicating a very long lifespan for this species.

Donation: All this for only a donation of $3 per person for adult members ($0 for child members), and $5 per adult visitor and $1 per visiting child to help with the costs of running the club, venue hire, insurance and so on.  Please bring the right CASH to help us avoid long queues. Thanks. We do not have EFTPOS facilities yet.

Entrance: It is a condition of entry that everyone signs in on arrival, thank you.

See you there for fabulous night.